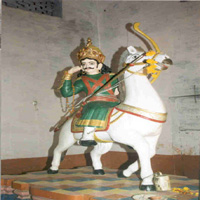 Bahraich is an ancient beautiful city in Uttar Pradesh located on the banks of River Sarayu. It is a place with a lot of mythological and historical value. It is believed that Lord Brahma created this forest covered region as a place of worship to rishis and thus it was called Brahmarchi. Even today, several hundred kilometers of this district is covered in dense forest. Some other historians believe this was the capital of Bhar Dynasty and hence the name Bahraich. It is also believed that Pandavas visited this place during their exile.

Bahraich was a part of the Awadh, a region in the modern Uttar Pradesh. A distinct dialect of Awadhi was spoken by the people in this region. The region was known as the granary of India and the land was very fertile being located on the banks of rivers. Awadh’s political harmony can be traced back from the ancient Hindu Kingdom known as Kosala and its capital was Ayodhya. However, the modern Awadh has major historical importance from the 16th century, the times of Akbar. Awadh was a very wealthy kingdom and could stand by itself and maintain its independence from the threats of Marathas, Afghans and the British.

Pathan is derived from the word Pashtuns. Their presence in the territory dates back from the early 10th century. It is believed that there were many Pashtuns in the Delhi Sultanate armies. There was a mass Pashtun immigration when the Pashtun Lodi Dynasty was on the rise. Mughals replaced Lodi, however, Pashtuns continued in the army. When the Mughal empire fell, Pashtun confederacies rose into prominence. The Rajahs of Nanpara also came into power in the Awadh region. Maharaja Suheldev was a prominent king during those times. And with the invasion of British in the end of the 18th century, all the areas came under the control of British.

Pathans of Awadh had two settlements in Uttar Pradesh, one in Lucknow and the other in Bahraich. The settlement in Bahraich arose in the region which was home to Nanpara and Uttraula, both the regions are now located in Balrampur district. They were at the heights of their power during the 17th century till the early 19th century.

Till the time of Akbar from the prehistoric period, the internal divisions and the limits of province have been changing constantly. Bahraich was one of the five divisions known as subahs during the Mughal period. The Mughals can be either from the Sunni or Shia sects. Sunni Mughals were very orthodox regarding religion. The Mughals would marry either from their own community or from similar communities such as Pathan or Muslim Rajput. The history of Mughals in Awadh is very well connected to the Nawabs. A large community of the Qazilbash Nawabs were a prominent family from the Mughals.

Bahraich Under the Nawabs

As the Mughal empire declined, the Nawabs rose into prominence. They became more stronger and independent. The Nawabi culture and cuisine is still relevant in Bahraich and other parts of Uttar Pradesh, prominently in Lucknow. Nawabs of Awadh were from the Shia Muslim dynasty. They encouraged to flourish the Persian language and they invited and received poets, scholars, jurists, architects and painters from Iran. And hence Persian was used in courts, academics, culture and in government. Shuja-ud-Daulah, the third Nawab was defeated by the British in the Battle of Buxar. The British east India company thus gained more control in the territory. Though Nawabs continued their reign in some parts, they ultimately lost their control to the British.

Bahraich During the British Rule

General Outrem acknowledged the rule of the British East India Company on Awadh on February 7, 1856. Bahraich was chosen as the centre of a division and Mr Wingfield was selected as its commissioner. The whole of the nation was against Lord Dalhousie since he was taking control of the kingdoms one by one. Bahadur Shah Zafar and Nana Saheb were protesting against the British and Nana Saheb visited Bahraich so that he can meet the local rulers. However, later he was thrown out of the place by the British. A mutiny was started in Bahraich and the struggle was on a very wide scale. All the kings were against the Britishers with the public support. All the three British officers were moved to Himalayas though Nanpara. However, the soldiers of the kings blocked their way and later when they tried to return to Lucknow, they were killed. And freedom fighters could gain the control of the whole district. However when Lucknow was lost their power perished. Later, Britishers captured Nanpara as well. Many kings fought and died on the struggle and British won the struggle with their superior forces.

Bahraich and The Freedom Struggle

The second freedom struggle started with the formation of the Congress party in 1920. Murari Lal Gaur, Baba Yugal Bihari, Durga Chand and Shyam Bihari Panday established Congress party in the district. Home Rule League Party was also prominent during those days. Raghupati Sahay Firak Gorakhpuri, Baba Vindhyavasini Prasad and Pandit Gauri Shanker visited Bahraich so that they can affirm the influence of the Congress. Sarojni Naidu paid a visit to Bahraich in 1926 and requested all the workers to promote self rule and wear Khadi. In February 1920 a total strike was announced in the region of Nanpara, Jarwal and Bahraich to fight against the Simon Commission.

Gandhiji had visited Bahraich in 1929 and conducted a public meeting in the old Government High School (The present Maharaj Singh Inter College). When Gandhiji started the Harijan Movement the whole of Bahraich participated and supported Gandhiji. Later, after the salt law was broken and a total strike was called in, many of the prominent leaders were arrested by the British. Next day a great procession took place and an effigy of British rule was burnt. Pandit Jawaharlal Nehru has also visited Bahraich and conducted public meeting in several places in the district.

Over 760 people from Bahraich provided their names for the Satyagraha Movement and more than half of them were arrested. When Gandhiji was arrested during the Quit India Movement the reaction by the people in Bahraich was very sharp. Many processions took place throughout the district and many local leaders were arrested as well. In 1946 the lines were drawn for the final freedom struggle. August 15, 1947, the day of Independence was celebrated in Bahraich with great enthusiasm. Approximately 1375 refugees were relocated from Pakistan and established themselves in the district.

Bahraich still has the reflections of the Nawabi and British era throughout the city. Many of the administrative establishments were made during the British period. The city has beautifully carried over the rich and vibrant past and blend it with its present.