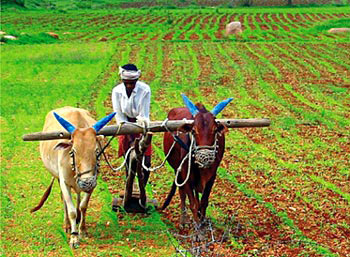 Bahraich is a city with great historical significance. Ever flowing rivers and dense forests which is home to various species of flora and fauna is another peculiarity of this district. The land is very fertile and most of the people lead their lives by agriculture. The climate is also very suitable for cultivation. Bahraich was an important market for grains and pulses during the British period. Today also the region is known for rice, corn, wheat, mustard, sugar and pulses. The dense forests in Nanpara and Bhinga accounts for herbs and timber as well. Sericulture is also there in Bahraich.

Bahraich is not a very well developed region for industries. However, industries which depend on agricultural and forest products are there. There are various sugar mills in Bahraich. Mills for rice and rich pulses are also there. Awadh fertilizers and Awadh food products are also established here.

Bahraich is very well known for its sugar industry which has posted positive growth rates throughout. There are major sugar mills in Bahraich in the areas of Nanpara, Jarwal, Chilawaria, Balha and Kaiserganj and all of them are performing quite well. These sugar mills procure sugar cane from local farmers and supply of components, spare parts and other consumable stores from outside of the district.

Nearly two-third of the total area of Bahraich is under plough and more than 80 percent of the people depend on agriculture for a living. Rice, Wheat, cereals and pulses, sugarcane, tomato and potato are the major commercial crops. Pulses and tomatoes are being exported within other parts of Uttar Pradesh and the country as well. Sericulture is also being developed in the district as the climate and environment is suitable for its development.

Bahraich has about 14 percent of the total area under forest cover which is almost double to the state average. Commercial forestry is in the nascent stage in the district for plywood, furniture, medicinal plants and other forest based products. Almost 65 percent of the rural and more than 50 percent of the urban households use firewood for cooking. Crop residues and cow dung are also widely used for cooking. Bio-gas units are being set up in Bahraich.

Rearing of sheep, pigs and goats are popular especially in rural areas. This can suffice in internal requirement of the district. This sector also needs to be brought in commercial lines.

Bahraich has four ever-flowing rivers and various other ponds and lakes as well. Fishing is very common in the district. This is done majorly for consumption within the district only. There is tremendous scope for pisciculture in a commercial set up and it will help the economy to boost up.